Ložiska ZKL nakupujte od autorizovaných distributorů
Find a distributor
Technical support:
+420 544 135 412
support%at%zkl.cz
The operating speeds at which bearings can operate are limited by the operating temperature of the lubricant used or by the material of individual bearing components, resp.
The critical operating temperature then depends on the head induced by friction in the bearing and the amount of heat that can be dissipated from the bearing.

The friction in the bearing depends on the load, the operating speed, the lubricant, and bearing type and size. Friction then significantly affects the generation of heat in the bearing and hence its operating temperature.
The total rolling resistance in the bearing is given by the sum of:

The friction torque can be determined, e.g. using the following relationship:

Constant coefficient of friction μ of bearings without glands.

The rolling friction torque depends on load, the static load, and bearing size:

The calculation using this model, however, is considerably complicated.

Bearing operating speeds are limited by the bearing internal design, their precision and size, bearing clearance, method of lubrication and loading design, which affect the dissipation of heat, generated by the bearing. Due to the specified influences, proper attention should be given when designing a suitable bearing.

By limiting speed, we mean the revolutions during which, under given operating conditions, a thermal equilibrium is created between the heat generated in the bearing and the head released from the bearing.

We are able to state, on the basis of experimental tests and practical applications, that there is a maximum speed that should not be exceeded for technical or economic reasons that are required to maintain the operating temperature at an acceptable level.

If the bearing is to operate at speeds that exceed the limiting speed, the lubrication, method of heat dissipation, the cage design, or the entire bearing design, resp. need to be modified. Manufacturers, for example, recommend that high speed bearings be designed with advanced precision or with the use of a sturdy cage guided on one of the bearing rings and with the use of oil or oil-mist lubrication.

The catalogue tables specify the limiting speeds that are defined as the thermal reference speeds in according with ISO 15312:2003. The reference conditions that determine the thermal equilibrium are: A temperature increase by 50°C above the ambient temperature and a 5% bearing static load range. These conditions apply for opened bearings with normal radial clearance.

Limiting speeds of rolling-contact bearings, as specified in the catalogue tables, are reference speeds for oil lubrication without EP additives with a kinematic viscosity at a temperature of 70°C as follows: 12 mm2/s or 24 mm2/s, resp. for line-contact thrust bearings.

The limiting speed is calculated using the following conditions of thermal equilibrium:

After modification and substitution, we arrive at the limiting speed equation:

where    f0´ [ - ] … function of bearing lubrication effect of same series, design, and precision

The given equation has only one real root, while this root physically corresponds to the value of the limiting speed.

The limiting speed values can be approximately determined according to the following relationships: 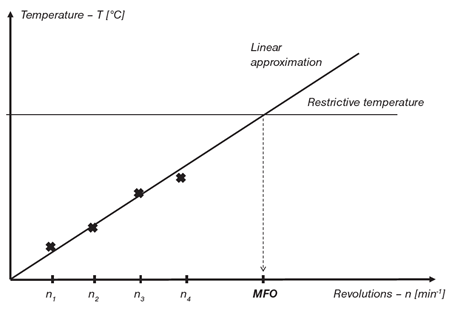 Obr. 6.1
Coefficient A for determining the approximate limiting speed is specified in table 6.2

When operating speeds are very low, the elastohydrodynamic lubrication film is not formed at the rolling contact site. Such loadings subsequently require the use of lubricant with EP additives.

Oscillation motions are another special case. In this type of motion, the direction of rotation changes before the bearing completes one revolution. The speed is zero at the moment the direction of rotation changes and, as such, the hydrodynamic lubricating film is not preserved. The lubricating film is formed, in such case, in the area of mixed lubrication. The limiting speed cannot be determined for oscillations, because the upper threshold is not determined by thermal equilibrium, by non-inertial forces. There is a risk that inertia may cause short-term slippage of rolling elements and damage to orbits each time the direction of rotation changes. Permissible acceleration or deceleration, resp. depends on the mass of the rolling elements and the cage, the lubrication, and the bearing loading.

6.3 Vibrations in the bearing

Sensing of vibrations is generally related to the propagation of noise. The bearing, however, is usually not the source of noise. Noise is just an audible effect of vibrations that are caused either directly or indirectly by the bearing on related components. It is the reason why the majority of noise-related issues are associated with vibrations of the bearing itself or the entire housing.

The number of rolling elements, which carry the load, changes during operation in radially loaded bearings. This effect causes a displacement in the direction of the load. While the resulting vibrations cannot be prevented, they may be reduced by introducing an axial preload that ensures loading of all rolling elements.

Roll-over of damaged bearing components occurs in cases of local damage to orbits or rolling elements, resp., which occurs during improper handling or incorrect installation, and it leads to vibrations. The source of vibrations (damaged component) can be determined using vibration frequency analysis.

Penetration of contaminants into the bearing may occur in bearings that operate in contaminated environments when rolling elements roll over the contaminants. The size of induced vibrations depends on the quantity, size, and structure of the contaminants. This does not generate typical frequencies, but an audible noise may be heard.

The frequency of vibration impulses created by toss-over of damaged bearing components has a simple relationship to the internal bearing geometry and to the frequency of shaft revolutions. These relationships can be described using equations that define the frequency of defects of individual bearing components. The specified equations assume optimal conditions, because they do not account for slippage of rolling elements. The equation for ball defects presupposes that the defect touches both the inner and outer ring per revolution of the rolling element.

6.3.2 Influence of the bearing on housing vibrations